The List is a first draft history and a comprehensive accounting of Donald Trump's first year.

Elizabeth Castelli, Ann Whitney Olin Professor of Religion, will be in conversation with author Amy Siskind about Siskind's new book The List at Word Up Community Bookshop/Libreria Comunitaria in Washington Heights on Sunday, April 15, 2018. The event will take place from 3pm - 5pm.

The event description is below.

In the immediate aftermath of Donald Trump's election as president, Amy Siskind, a former Wall Street executive and the founder of The New Agenda, began compiling a list of actions taken by the Trump regime that pose a threat to our democratic norms. Under the headline: “Experts in authoritarianism advise to keep a list of things subtly changing around you, so you'll remember” Siskind's “Weekly List” began as a project she shared with friends, but it soon went viral and now has more than half a million viewers every week.

Compiled in one volume for the first time, THE LIST is a first draft history and a comprehensive accounting of Donald Trump's first year. The List chronicles not only the scandals that made headlines but just as important, the myriad smaller but still consequential unprecedented acts that otherwise fall through cracks. It is this granular detail that makes The List such a powerful and important book.

Amy will be in conversation with Elizabeth Castelli, the Ann Whitney Olin Professor of Religion at Barnard College. Author and editor of several books, Elizabeth also recently translated Pier Paolo Pasolini’s Saint Paul (Verso Books). She is currently at work on a collection of essays on the theme of confession. Elizabeth serves on the boards of the Brooklyn Institute for Social Research, the Center for Religion and Media at NYU, and the Center for Constitutional Rights. She is an active volunteer and member of the Development Committee at Word Up. 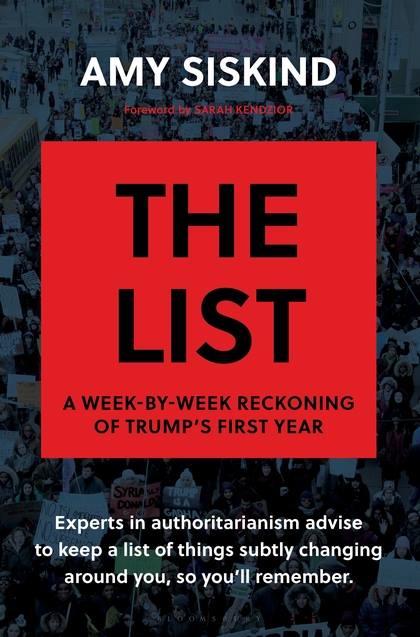